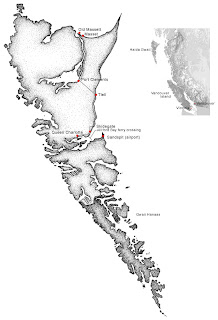 Bruin Bay
Graham Island
This bay received its name because a large bear came down to the beach to feed abreast of the H.M.S. Virago when at anchor there, May 1853.

Cumshewa Inlet
Moresby Island
Derived from the Bella Bella word meaning "rich at the mouth of the river."

Juan Perez Sound
Moresby Island
Named after Sub-lieutenant Juan Perez, sent by the Viceroy of Mexico in charge of an exploring voyage to the North-west Coast in 1774. Named by George M. Dawson, Geological Survey of Canada, 1878.

Langara Island
northern extremity of Haida Gwaii
Originally named "North Island" by Captain George Dixon of the ship Queen Charlotte in 1787. Named after Admiral Langara of the Spanish Navy by Lieut. Jacinto Caamano, commander of the Spanish corvette Aranzazu in 1792. The Spanish name was adopted by Captain Vancouver on his charts and in the twentieth century superseded the original name.

Laskeek Bay
Moresby Island
From an old Tsimshian name meaning "on the Eagle," one of their clans. This was the Tsimshian name for the Haida village of Tanu situated there.

Massett
Graham Island
From the Haida name of Maast given to a large island situated in the inlet about 3 miles above the village.

Skidegate
Graham Island
From the Haida word meaning "red paint stone," because of the calcinous rocks found there which could be ground up for paint pigments.

Yan
Graham Island
Means Beeline Town (literally, "to proceed in a straight line"). The town chief of Yan, name Stiltla, was an accomplice of Chief Wiah of Masset in the capture of the ship Susan Sturgis in 1852. After its seizure, the ship was brought to Yan, then looted and burned a short distance offshore from Stiltla's House Looking at Its Beak. Stiltla built another large house at Masset, on which he displayed a carved eagle from the sternboard of the ship.
Posted by Giihlgiigaa Tsiit Git’anne at 9:19 AM